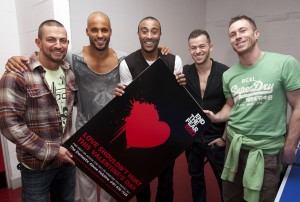 The stars of Strictly Come Dancing and local football clubs have teamed up with a young domestic abuse survivor to help put a stop to domestic abuse this Valentine’s Day.
Celebrities including Ann Widdecombe, Zoe Ball, Patsy Kensit and Colin Jackson have joined 15-year-old Brooke* and are urging people across Greater Manchester to pledge their support to ending the fear of abuse.

Giant Valentine’s Day cards have been produced and will be placed in every borough across Greater Manchester for people to sign.  With the message: Love shouldn’t hurt this Valentine’s Day, the aim is to get as many people as possible to sign the cards to stop abuse happening in many homes.

Brooke is bravely speaking out about how she suffered at the hands of her mum’s abusive partner from the age of 10.  She is hoping that by sharing her experiences, it will give other victims the courage to come forward and seek the help and support they need now before the abuse escalates any further.

“Valentine’s Day is an occasion when people are thinking about their relationship, so this is a timely reminder that victims of domestic abuse don’t have to suffer in silence and there is help and support on hand,” said Detective Superintendent Phil Owen of Greater Manchester Police’s Safeguarding and Vulnerable Persons Unit.

“This young girl has been extremely brave in coming forward to tell her story and it reminds us of the impact this crime has on many children, who feel they have nowhere to turn to for advice.”

Detective Superintendent Phil Owen continued: “Given the Manchester derby match took place this weekend, tensions may also be running high with some fans, so we are determined to send a clear message that there is no excuse at any time for domestic abuse.  I would urge people to pledge their support to this campaign by signing their local Valentine’s Day card.

“I would also like to reassure victims that we have specialist domestic abuse investigators on hand all year round to provide support from the initial report throughout the investigation and during court proceedings.

“However, if victims, their friends or family members don’t want to report it to us, there are many other support agencies available to provide help and advice.  Offenders should also be warned that if they act in an abusive manner, we will arrest them and work closely with the victim to help end the abuse.”

”We would urge anyone who has been a victim of domestic abuse regardless of their age to seek help as early as possible, even if it is just to find out what support and options are available to them.  You can call the Greater Manchester Domestic Abuse Helpline on 0161 636 7525, Monday to Friday.”

Dr Kate Ardern, Lead Greater Manchester Director of Public Health for Domestic Violence, said: “Domestic violence is a serious issue that can affect anyone regardless of sex, age, or gender and we hope this campaign will channel support to those at risk.

“A home is a safe haven for most but for others, it is a place of heightened fear and threat.

“We hope that by signing this pledge we can reduce the fear of domestic violence across Greater Manchester and raise awareness about an issue which easily goes unnoticed”.

A printable version of the poster for this campaign can be downloaded from the site within the Practitioners section  of this site and clicking on the publicity materials tab. 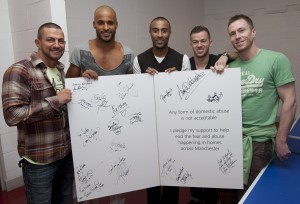 Getting help in your area